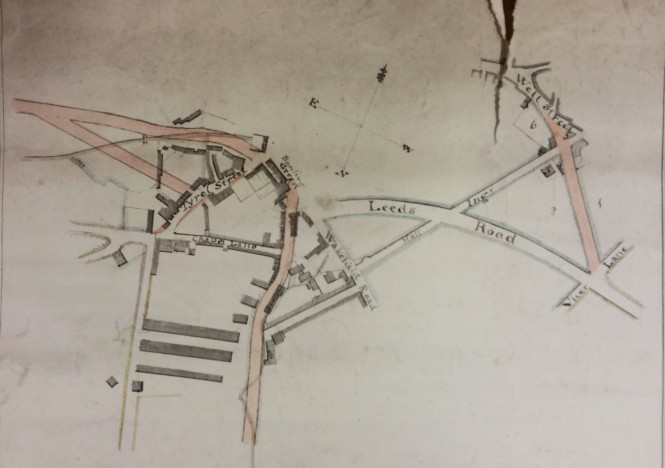 Many maps and plans were drawn prior to planned developments that may, or may not, have actually taken place. There are two maps in the Local Studies Library reserve collection which evidently were produced to display the same projected roads leaving Bradford to the south and west. Here I have reproduced the large scale plan illustrating the town centre. It is not easy to interpret and I would be very happy to have my conclusions corrected by anyone more familiar with the evolution of our road transport links.

For a start the compass points are mislabelled, although the arrow head is pointing north as it should do. The top right corner of the map would have been clearer if the parish church had been included. Church Bank is approximately the continuation of the mapped Hall Ings, although much of Hall Ings has now vanished following development. Leeds Road is in existence which dates the map to later than c.1825-30 during which period the new turnpike to Leeds was constructed by the Leeds & Halifax Turnpike Trust. Is there any other indication of date? There is no suggestion of the the line of the Lancashire & Yorkshire railway from Halifax via Low Moor (opened 1850), so the map must be earlier than the late 1840s. The map almost certainly pre-dates Bradford becoming a borough in 1847.

The short pink road joining Well Street to Vicar Lane was built and still survives. It also took the name of Well Street and, resurfaced, it is between Little Germany and the new Broadway shopping centre. The end of Wakefield Road is modern Bridge Street. The real difficulty comes with the pink track directed north from the bottom centre of the map. Is this intended to be Manchester Road? No, Manchester Road must be the straight highway ending at the junction of Tyrrel Street and Chapel Lane. The pink road seems to be following the course of the Bowling Beck and the watercourse is presumably indicated by the faint superimposed wavy line. The Bowling Beck is now culverted but I believe it does lie well east of Manchester Road. What is the unnamed linking road joining the pink track to Wakefield Road? It is too far north to be Croft Street, which survives, but it is in the right place to be Union Street which was lost in the development around the Interchange. If I am correct then the pink road itself was never constructed but the second small scale map in the LSL enables one to project its further course. It would have joined Manchester Road just before Ripleyville.

As you can see in the town centre the planned road would have reached a point marked ‘bowling green’. After a short gap another road leaves westwards from two origins. I wondered if this was approximately the track of the future Thornton Road (constructed 1829). This works if Great Horton Road is the unnamed thoroughfare making a right angle with Manchester Road, but the pink tracks seem to start too far north.  Another superimposed faint line marks, I assume, the course of the Bradford Beck in which case the ‘box’ at the end of it would then be the Soke or Queens Mill. I cannot make the pink tracks fit with any roads I know, but in any case the  street plan here changed radically around 1870 with the creation of Aldermanbury and Godwin Street. The other small scale map brings the planned road to a junction with Brick Lane after which it does continue along the line of Thornton Road as far as I can judge. If I am right the illustrated map must date from the late 1820s after the construction of Leeds Road but before that of Thornton Road.

I am on firmer ground with the ‘bowling green’. This was an inn that once stood on Bridge Street. Cudworth mentions that in the 1830s its owner was a Mrs Susannah Ward, widow of Joseph Ward, about the time then that this map was being made. On-line masonic records suggests that the Bowling Green Inn was in existence in the late eighteenth century (c.1794) and William Scruton, in Pen & Pencil Pictures of Old Bradford, pushes that date back still further into the seventeenth century. He regarded the Bowling Green as ‘the best inn of the town’. It was used by the Royal Mail and the open space in front of the inn was seemingly employed for political meetings. Copies of Scruton’s book, which mentions many other former Bradford taverns, are to be found in the Local Studies Library. Also available is Michael Hopper’s History of Communications in Bradford up to the Period of the First World War.

One thought on “Map of the Week: Bradford Centre”