Extractive industries once contributed substantially to the wealth of West Yorkshire. Local coal mining may well have had medieval roots and there is good evidence for the industry in early seventeenth century Bradford. At that time, in addition to domestic use, coal was employed as a fuel for lime burning and black-smithing. The value of the mineral was transformed by Abraham Darby’s discovery at Coalbrookdale that it could be coked to produce a replacement for charcoal in iron-smelting. This occurred at the beginning of the eighteenth century, although it took several decades for the technology to be widely adopted. In south Bradford iron-smelting developed at Bowling and Low Moor using coked  coal from the Better Bed seam, and ironstone from the Black Bed seam roof. Around the same time the need to fuel rapidly increasing numbers of steam engines also greatly increased the demand for black diamonds.

Few, if any, districts of the city are unmarked by some evidence of old mining activity. Coal exploitation had long been undertaken in the townships of north Bradford including: Heaton & Frizinghall, Shipley & Northcliffe, Baildon, Idle & Eccleshill, Thornton & Clayton, Denholme, and Wilsden. In these communities the first two seams in the Coal Measures series of rocks were accessed, those being the Soft Bed and Hard Bed. Mining in Wilsden is well recorded by maps held by both West Yorkshire Archives (Bradford) and the LSL. The Archives has a plan (WYB346 1222 B16) of Old Allen Common in Wilsden including its collieries. This shows the area where Edward Ferrand Esq, as Lord of the Manor, had mineral rights over common land. This was ‘made for the purpose of ascertaining the best method of leasing the coal’ by Joseph Fox, surveyor, in 1829. Fox has already featured in this series. The collieries named were operated by Padgett & Whalley, and Messrs. Horsfall.

The Local Studies Library has two Wilsden colliery plans. The first shows Norr Hill. This was a drift mine at which the deeper Soft Bed was accessed down an inclined plane. The coal was removed through galleries but large pillars of the mineral were left to support the roof. The ‘take’ was perhaps 60%. If you are sharp-eyed you may be able to make out the words ‘geal (or goul) 4½ yards down to south’. This must be a local mining dialect term indicating that a geological fault interupted the seam. 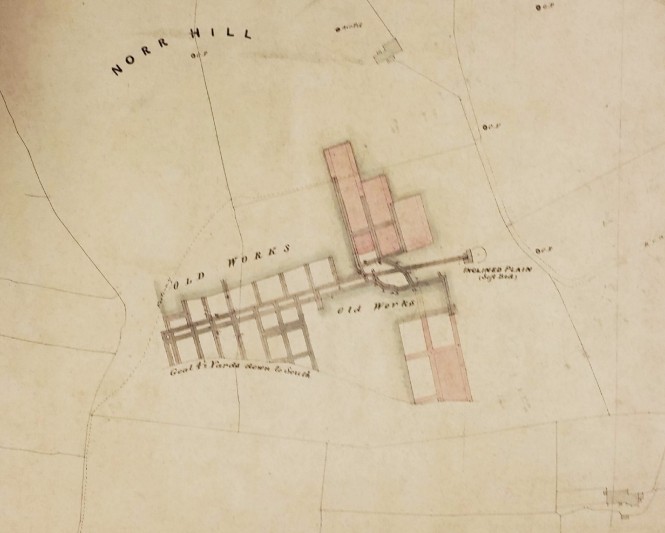 The other illustrated mines at Old Allen Common and Pudding Hill were the more common shaft mines. The Soft Bed was accessed by the Jack Pit and Jer Pit. Tom Pit accessed the shallower Hard Bed. Again there is a system of galleries and evidence of faulting. One gallery heads towards Padgett’s Colliery. Many areas are ‘old’ or worked out.

Mines like these would need to be drained and ventilated. Drainage was often achieved by digging a long underground channel or ‘sough’ to take water to a lower level surface watercourse. As well a shaft to access the galleries a second ‘air’ or ventilation shaft was often sunk. In operation active men were needed as ‘getters’ to hew the coal. As the seams were thin this must have been undertaken in a lying or kneeling position illuminated only by flickering candlelight. Hewed coal was then conveyed in wicker baskets, called corves, by ‘hurriers’ to the shaft bottom. If they were physically capable children and women could fulfil this function, although women working underground were seemingly becoming rare in the Bradford area by the early nineteenth century. The full corves of coal could be extracted by a hand-windless or, if the shaft were deep, a horse gin, and then removed by carts or packhorses to the nearest roadway. To men labouring as miners in the early nineteenth century the industry must have seemed timeless. Could they ever have imagined that in 2015, with the closure of Kellingley Colliery, the deep-mining of coal in Britain would be brought to an end?