In August 1876, seven members of the Keighley Board of Guardians were arrested and imprisoned in the Debtors’ Prison at York. Their crime was not cooking the books but determinedly opposing what they saw as an attack on the civil liberties of the individual by the Government. The attack was the attempted enforcement in their town of the Vaccination Acts of 1867 and 1871 which made all Guardians responsible for enforcing the vaccination of the children within their Union.  The case of the Queen versus the Guardians of the Keighley Union came up at the High Court of Justice in London in November. The story is almost local legend and is the subject of regular study because of the national, as well as local debate and because of the popular support anti-vaccination attracted.

In Keighley there were near riotous scenes as well as the publication of broadsheets of verse and even carte-de-visite portraits.

The following records are taken from the Keighley Photographic Society, held at Keighley Library and the broadsheet is part of the library pamphlet collection.

Sylvia Valentine has made the most detailed and revealing study to date and has given talks across the country and is booked for talks in Canada in 2018.

Much of her original research was carried out using the resources of Keighley Local Studies Library and its fantastic archive. 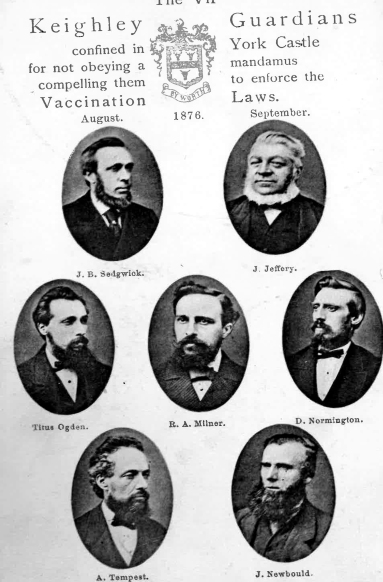